Ever been to an old-fashioned candy store? It’s a whole experience: the gleaming countertops, the shelves stocked with bright-coloured confections, the real human doling out sheer deliciousness. This was the kind of experience John Delaney wanted to create with his premium hard candy company VIP Hard Candy. And this warm, delightful experience needs to characterize every aspect of their marketing—especially in an application as important as their Point-of-Sale (POS) display.

John and his wife were semi-retired veterans of the flavour industry when they decided to apply their expertise to candy. As “true flavour artists”, they set out to create five flavours that would be hard to find anywhere else: earl grey, cinnamon bun, berries and mint, caramelized bourbon, and melon, guava, and pear. Most gratifying of all? They created a shop in their hometown of Sooke, BC, where they could sell their handmade candies to excited folks. Suffice it to say, the Delaneys’ days are brimming with literal “kid in a candy store” energy. 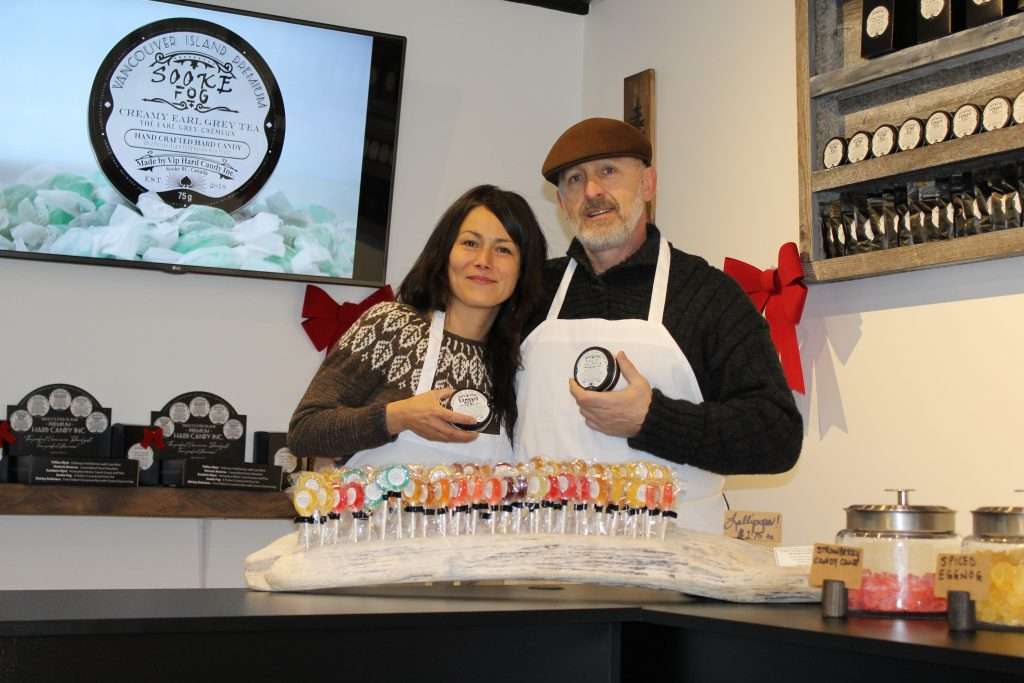 At the same time, wholesale has always been an important aspect of their business. With such niche flavours on offer, connecting with appreciative new retailers is usually only a matter of getting the word out. But John found it awkward to pitch new wholesalers by “juggling five tins in [his] hand”.

That’s where the Point-of-Sale (POS) display came in. The thought was to create something “bolder” than your typical retail display. Something covered in VIP’s candy warm, vintage branding that would stand out and boost sales. John had a very specific vision in mind, and he’d created the graphic design himself. He just needed help executing it. And that’s where Great Little Box Company/Ideon Packaging (GLBC) came in.

John had already created the design for VIP’s POS display. He wanted it to be as multifunctional as possible. Ideally, it would serve as a display at his own shop, a shipper for about 18 tins of candy, and a counter display in retail locations. It had to be robust enough to hold the product. Its design had to be user-friendly enough that converting it from shipper to display wouldn’t pose difficulties for wholesale clients. And it had to be delightful enough to capture the spirit of VIP Hard Candy.

All of the above proved to be a tall order. Initial passes were flimsy. John felt his lack of knowledge keenly. So, he reached out to a company known for customer education: GLBC.

Paired with an “unbelievable” packaging specialist at GLBC, Joanne Johnston, progress happened quickly. John learned about the best solutions for his custom-sized POS, got the best deals possible, and ultimately created the display with only one round of reworking. After approval, he was able to receive his display even quicker than expected.

Once deployed, the displays worked like a charm. Wholesalers wasted no time ordering theirs once they saw them. Conversion from shipper to display took all of 15 seconds. One Vancouver Island chain, Red Barn Markets, ordered them for all seven of their locations. Overall, sales are up, and the POS has been “the difference-maker” for VIP’s wholesale business.

GLBC’s work with VIP Hard Candy helped the company to:

Thanks to their new POS display, VIP Hard Candy is spreading across Vancouver Island. But they still like it best when they get to serve someone in their shop in beautiful Sooke, BC. Pay them a visit sometime.