At Liquidity Wines, every step you take draws you more deeply into a work of art. Ian MacDonald, Liquidity’s President, explains that he and his team have “designed the relationship that exists between customers and our winery from the ground up—literally.”

That means visitors to this celebrated South Okanagan winery, bistro, and art gallery are immersed in a depth of beauty they might not have expected. From its dramatic front entrance to glass walls that expose tasters to a jaw-dropping view of McIntyre Bluff, Liquidity is an aesthetic journey. Between points A to Z, wine lovers revel in rolling hills, streams, flowers, a sculptural park, a bistro serving organic local food, and much more.

“When people come, they often say, ‘I’d love to live here’,” says Ian. “That’s the effect we’re going for: an environment  with so many delightful sensory experiences that people never want to leave.”

The land where Liquidity grows its vines using sustainable, time-tested viticultural practices has an agricultural history stretching back to the 1930s. At that time, the entrepreneur Charlie Oliver planted over 110 acres of fruit trees, creating what may have once been the British Empire’s largest orchard. About a third of Oliver Orchard eventually became Liquidity’s land; its first grape vines were planted in 1976.

Several decades later, Ian was a new transplant to the South Okanagan, having previously worked as the VP of sportswear-maker Sunice. His vision was to create a winery that could showcase the tremendous beauty of his new home, along with its world-class wines. Acclaimed wine-maker Alison Moyes helped him deliver on the latter. And when it came to the former, his own design instincts helped him to curate an environment like nothing else in the region.

But even a winery with views that British Columbia uses for its provincial tourism campaigns can’t rest on its laurels, however attractive they might be. Ian acknowledges that he and his team operate in a “very competitive business, more so every year.”

“To be successful, you have to go the extra mile when it comes to delivering an experience. And you need to work with people—people like the Great Little Box Company team members—who understand that.”

Melissa K. Harris, Liquidity’s Brand Architect, explains that prior to working with GLBC, the winery was faced with uninspiring packaging solutions. “Standard suppliers tended to offer turnkey solutions. The problem with that is you end up just looking and feeling like everybody else.”

To create design-forward, delightful experiences, Liquidity’s packaging had to stand out. For example, Liquidity’s Equity Tasting Club is the first wine club in Canada to give subscribers opportunities to sample wines at home before purchasing them. That necessitated creating an exquisite display of small bottles and full-colour cards that could ship safely. GLBC created a customized solution appealing enough to also serve as a gift box.

Or consider Liquidity’s four-bottle carrier. Ian explains that the winery wanted a more attractive solution than the standard paper bag for carrying purchased wines from the transport room. GLBC worked with him to create the full-colour carrier, which serves a two-fold purpose. First, it subtly but successfully up-sells by encouraging tasters to fill it with four wines rather than one. Secondly, its beautiful design gives it a second life as a marketing tool, as customers tend to use it to transport wine to dinners and parties. 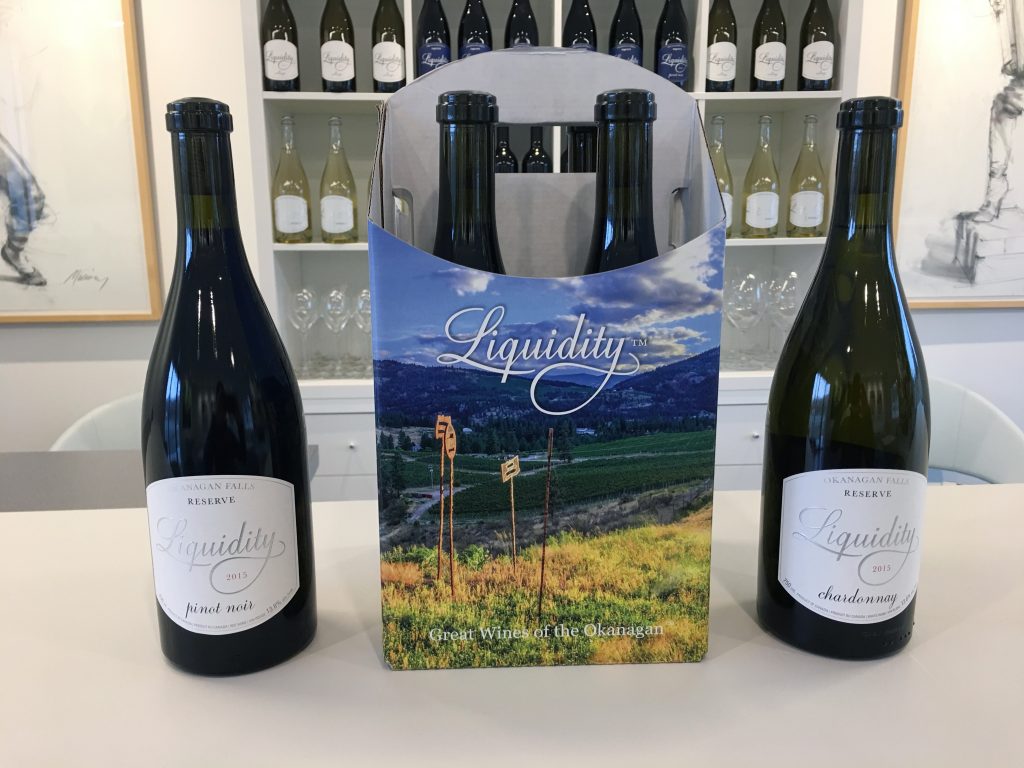 “When we are creating something, we need a fresh set of eyes,” says Ian. “GLBC has definitely played that role with us.”

Brands like Liquidity need design solutions, not just packaging solutions. GLBC is proud to deliver both, within a partnership bent on celebrating beauty for years to come.