When Julianne Weber told her parents she was going to start a job making labels, they openly wondered if it would be too boring. She laughs, “You’d be surprised, Mom and Dad.” As it is, Julianne has been “making labels” for Great Little Box Company/Ideon Packaging (GLBC) for 5 years now. She works in the Prepress Division, which means she’s part of the team that turns graphic designs into physical products. Specifically, she sets up work for the HP Indigo WS6800 Digital Press.

“I take a designer’s files and help turn that into what we call a ‘ripped file’. It’s all detail work and it’s complicated because there are so many finishing options, from special foils to embossing.”

Julianne worked in a variety of print positions in her home province of Saskatchewan before joining the GLBC team. “I started out printing business cards and such at Mom-and-Pop shops. One time I even got a job doing laser engraving at a trophy shop.”

But when she started working with labels, she found something that suited her exceptionally well. “I’ve always been attracted to tech, and I love working on computers, but this is also a craft. We’re making something tangible and real. It’s so exciting to see something you worked on in the store.”

It helps, too, that she deeply appreciates the environment in which she does this work. “GLBC has always been progressive in their investments. That means we have excellent equipment and when a customer wants to try out something cutting-edge and eye-popping, we can figure out a way to do it. Management has done an excellent job of putting the right people together. We’re good problem-solvers and we have what we need to innovate.”

Then there are the parties. The GLBC “box trips” (often to Las Vegas); the explosion of costumes at Halloween. Julianne loves the fact that fun is part of the culture. “I remember my first Holiday party. The President, Brad Tindall, rick-rolled the entire party.” 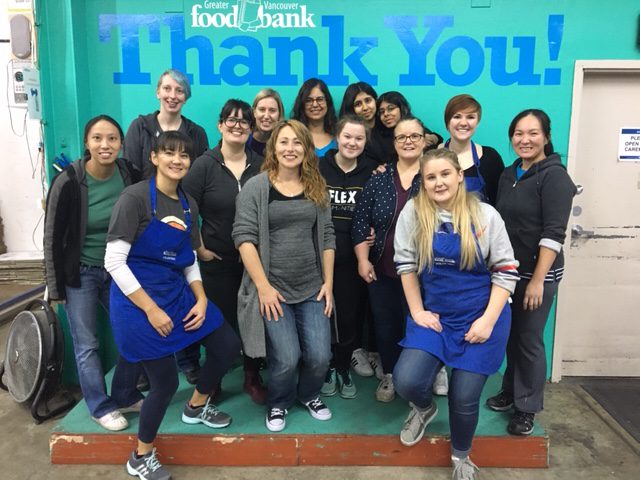 As the company has grown, so have Julianne’s skills. Recently, she got into automation programming – removing the need to do repetitive tasks and creating more streamlined workflows. She’s proud of the fact that she’s the one at GLBC to ask about all things digital pre-press. She appreciates being able to mentor new employees the way she once was. And overall, she feels she’s fulfilling the sense of mission her father instilled in her.

“I owe a lot of my work ethic to my father, who worked in construction – a labour-intensive industry where problem-solving skills often go unrecognized. So, I’m grateful that I’m in a position to be putting forth my best effort and having it appreciated by my team members, leaders, and customers.”

This is part of a series of posts celebrating our team members on the occasion of our 40th Anniversary. GLBC’s story is all about people who care about their company and a company who cares about people. Read more here.