Fit Foods Ltd. makes sports supplement products for athletes who are “all-in versus all-talk”. But what differentiates these athletes from the rest? Partly, it’s their willingness to invest in high-end supplementation—products like Fit Foods’ pre-workout product MUTANT® MADNESS ALL-IN. As they put it, “this ain’t no cheap stim.”

When it comes to the supplementation market, attention-grabbing product releases aren’t the norm. And that’s where the Fit Foods team saw an opportunity. What if they created a “pre-hype launch kit” that would boldly communicate the high-end nature of their solution? That’s where Great Little Box Company/Ideon Packaging (GLBC) came in as a packaging partner who could make the vision of the kit come to life.

It was important to get the details right and strike just the right tone with this ambitious product release. After all, Fit Foods has been building their empire since 1996. They maintain many robust sales channels, including health stores, natural grocers, gyms, sports stores, grocery, pharmacy, mass, convenience, and e-tail sites. They have their own licensed NHP site, a certified organic manufacturing facility, EU registration, and CFIA site manufacturing license. In the supplementation market, if any company is “all-in”, it’s Fit foods.

With the challenge of creating a kit that would truly generate hype ahead of its launch, Fit Foods and GLBC got to work. The results speak for themselves.

The plan for the MUTANT® MADNESS ALL-IN product launch was ambitious—especially for an athletic supplement targeted toward male athletes. The vision was for a custom box that could tell the story of what made this premium supplement “all-in”. The two teams also wanted it to feel like a collector’s item that customers would actually hold onto. Again, this was a unique goal for the supplementation space.

Once the box was completed, it could be sent to buyers, influencers, PR outlets, and athletes. The hope was that it would create a significant impact on social media. In order to achieve this outcome, the box had to be truly compelling.

The main challenge for the team was bringing all the components together on time for the big release. Fortunately, this is an area in which GLBC excels—getting it done when it absolutely needs to be done, with no exceptions.

As a result, the pre-hype kit was deployed just as planned. Once it was out in the world, it did exactly what Fit Foods hoped it would do. There were plenty of eyes on their social media. They used it for contests at retailers. Influencers received and shared the kit. Fit Foods sold it on their website as a limited-edition piece. The packaging had impact.

GLBC’s work with Fit Foods helped the company to: 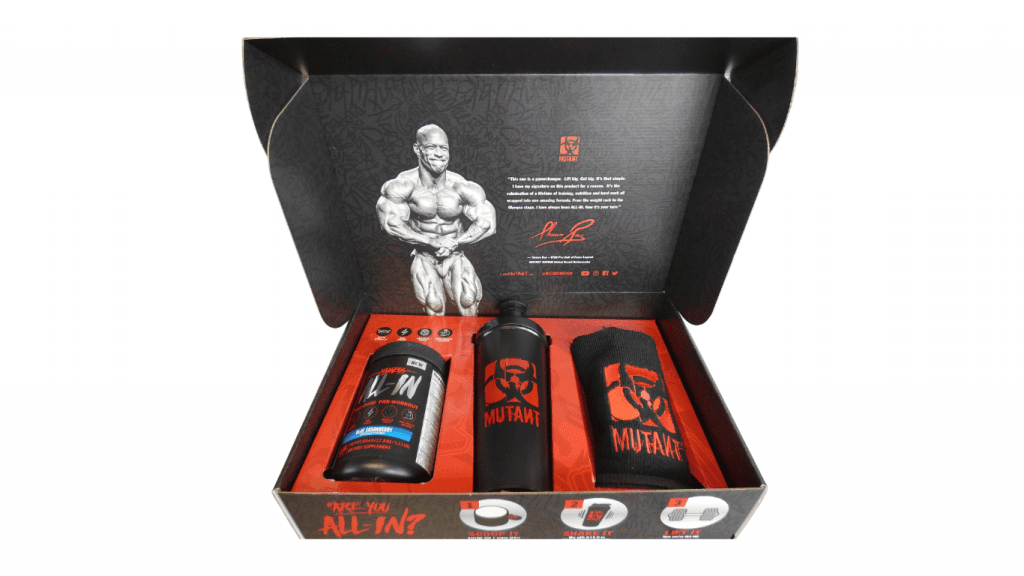 Fit Foods is willing to stand out in the supplementation market. And after decades of building a formidable manufacturing and distribution presence that spans 70 countries, they quite frankly deserve to stand out. The MUTANT® MADNESS ALL-IN pre-hype kit was a satisfying way to help a premium company win some well-earned attention. Fit Foods is “all-in” and always will be.