In her “wildest hopes and dreams” Crystal Regehr Westergard never imagined she’d be selling her millionth chocolate bar. Less than a year after reviving Cuban Lunch, a peanut-and-chocolate bar beloved since the 1930’s, Crystal is stunned by success.

“I do feel like I’m living in some sort of tv show,” she laughs. “Except this is a tv show that would have never aired because they’d have sent it in for rewrites. It’s too unbelievable.”

Crystal, who runs the new Cuban Lunch with her husband in Camrose, Alberta, found inspiration for the unlikely venture in her 85-year-old mother. Crystal wanted to bring a special present to the nursing home to cheer her up: her favourite candy bar. But, sadly, the Winnipeg factory where Cuban Lunch bars were once made had ceased production of the product in 1991.

To the Camrose couple, it seemed like an opportunity to bring back a fun product they knew many Canadians missed.

They were then amazed to discover that the original owners had let the Cuban Lunch trademark lapse. However, actually purchasing it was a challenge at first.

“The local registrar just could not believe we could buy this incredibly valuable trademark for a couple hundred bucks. They wouldn’t let us have it!”

Fortunately, a lawyer advised the couple that the purchase was perfectly legitimate. They bought it online, and then started solving the puzzle of how to recreate a popular product that had been obsolete for years.

Crystal reached out to Great Little Box Company (GLBC) for help with a major challenge: creating the Cuban Lunch’s unique packaging from memory.  As she recalled, the rectangular bar sat in a clear wrapper with red, white, and black lettering. The problem was that modern design platforms aren’t set up to work with clear applications.

Crystal explains, “It was difficult to figure out how we could mock things up so that the members of the GLBC Innovation Solutions Team could actually see the label and read the screen. We had to go back and forth with GLBC to solve that issue—and they were incredibly patient with that.”

Crystal had a picture of Cuban Lunch cartons from the eighties or nineties, so that aspect of the packaging was easier to pull off. And GLBC was able to connect her with a specialized company for creating the iconic ruffled red paper cups that sit in the clear wrappers.

Then when it came to assembly, Cuban Lunch and GLBC had to do some troubleshooting. “When you have a goofy-shaped product like ours, it’s tough to get a wrapper that will work well with the flow-wrapping machine that puts the wrappers on the bars. Again, GLBC worked patiently with us until we got it right. Their ability to customize was awesome.”

Eventually, Crystal found vintage video footage showing clear images of the packaging. The verdict? “We got it right on! It looks just like the original.” 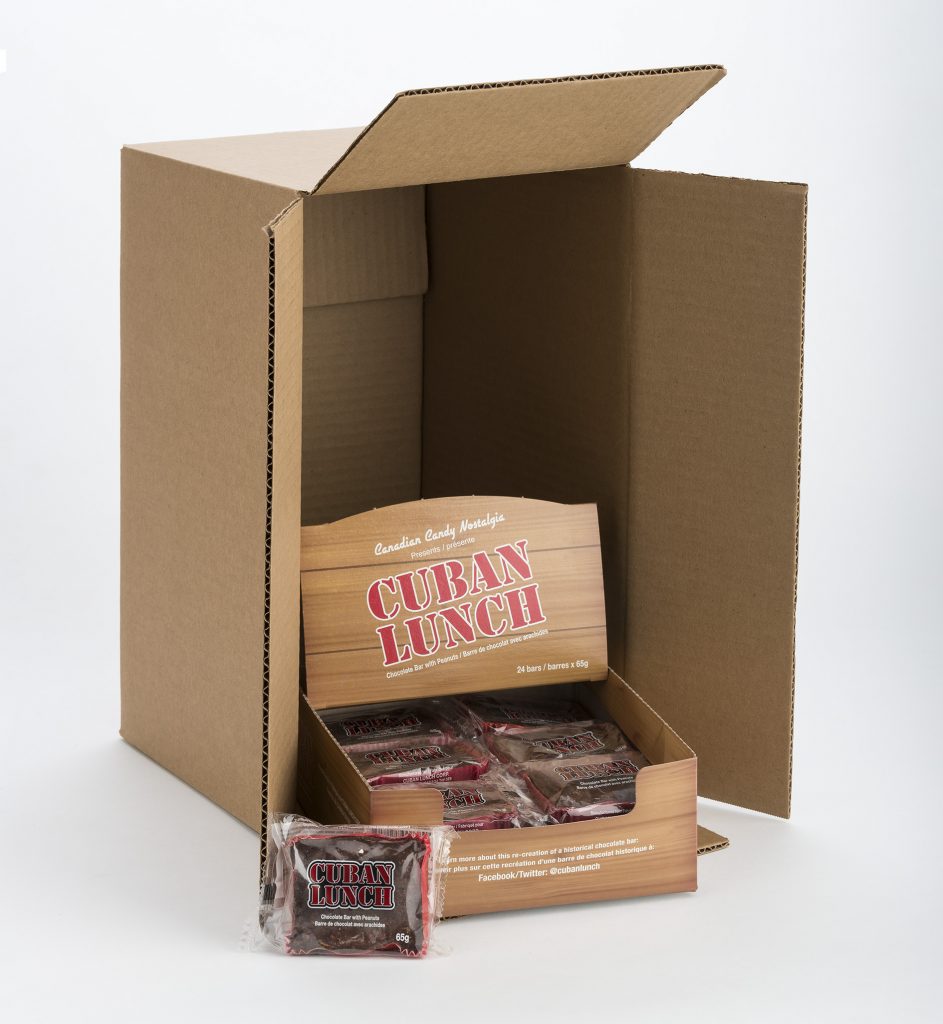 Clearly, that has made a difference. Holding a candy bar that looks like it came “right out of 1980”, as Crystal puts it, is key to the revived product’s popularity. Cuban Lunch is flying off the shelves, supplying warm nostalgic feelings across the nation.

One day, Crystal and her husband would potentially like to bring other obsolete Cuban Lunch products to the market. In the near future however, Cuban Lunch fans can most likely look forward to a Cuban Lunch flavoured ice cream.

GLBC is always up for a challenge—but few of them are quite as fun as bringing back a candy bar from the  past. As Cuban Lunch serves up nostalgia to candy lovers, GLBC is proud to support them.