Castoro de Oro Estate Winery: “Having fun being first” with Wine in a Can

Great Little Box Company•About Us•Blog•Blog•Castoro de Oro Estate Winery: “Having fun being first” with Wine in a Can

Bruno Kelle and Stella Schmidt, co-owners of the Okanagan winery Castoro de Oro, were at a winemaking conference when they discovered an unlikely solution to their problem. For six to seven years, they had been releasing their small-batch, handcrafted, 100% BC wines to hotels in half size bottles perfect for in-room dining. But the 375-millilitre bottles they’d been using had sky-rocketed in price. 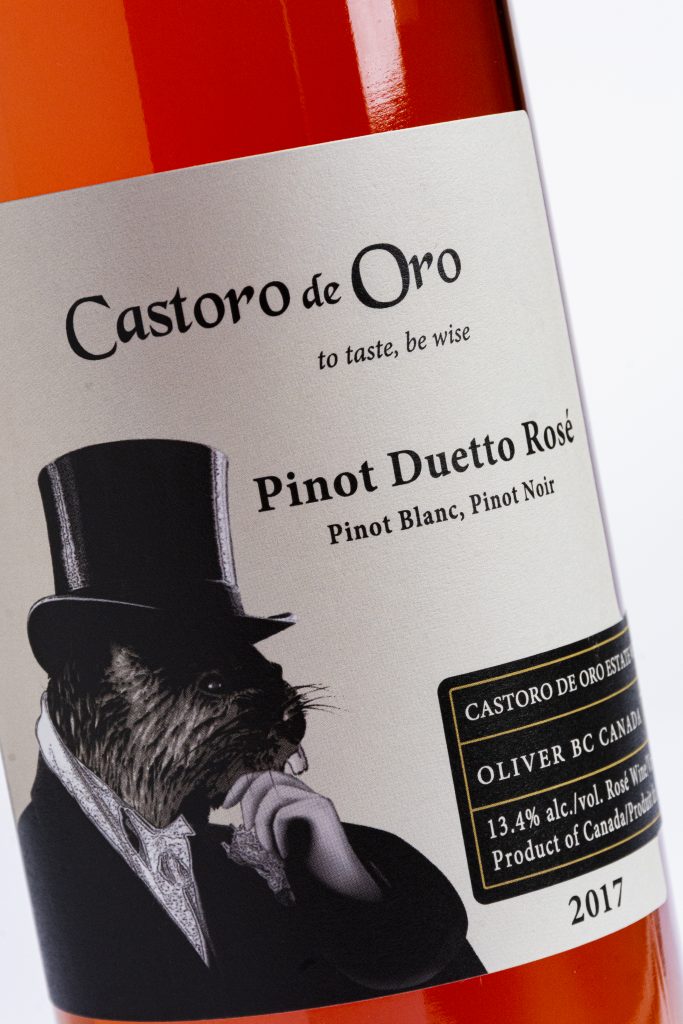 “At the conference, we found a supplier who found a way to put wine in cans,” explains Stella. “Normally, because wine is higher in alcohol, it doesn’t interact well with the linings in cans. But they had a new one that was designed for wine.

“Bruno said, ‘Are you kidding me? My wine’s never going in a can.’”

But the two vignerons are naturally adventurous people, so they considered all of the advantages. A can will chill quickly. It is tremendously transportable; you can fit a third of a normal-sized bottle into this lightweight vessel. It allows for poolside sipping, for wine on hikes, wine at the beach, or simply as a single-serve to be poured into a beautiful glass; it is premium wine after all.

“We kept asking them, ‘Are others doing it?’” says Stella. “They said nobody else was biting yet. But there’s something fun about being first.”

Once Castoro decided to blaze this trail, they naturally had a few packaging challenges to address. They had followed their “label guy”, when he decided to work for this crazy little company called Great Little Box Company.” So, their Packaging Specialist from the Label Division and GLBC’s Innovation Solutions team were tasked with two important missions: printing the “funkier, less traditional” labels, newly designed by HAWK Design & Creative, Calgary, to be durable and water-resistant to suit the can and enabling the product to ship plastic-free. 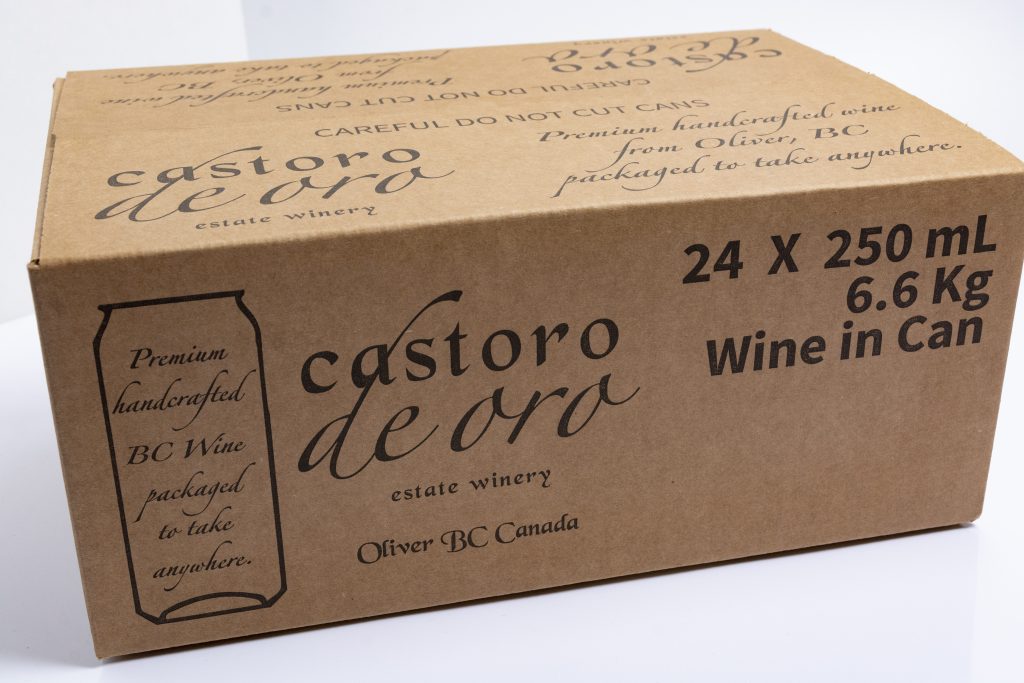 “We decided we wanted as little plastic involved as possible,” says Stella. “We didn’t want to put our cans in flats wrapped in plastic or have plastic rings, but how could we ship them safely?”

The solution was, as Stella puts it, chuckling, “a great little box.”

Since the product launched in June, the reaction has been fantastic. “People are loving the boxes; they think they’re so cute,” says Stella. “Also, the labels are amazing. They hold up very well in a cooler filled with ice, look elegant and yet not feminine, and the critics and consumers are loving the wines.” 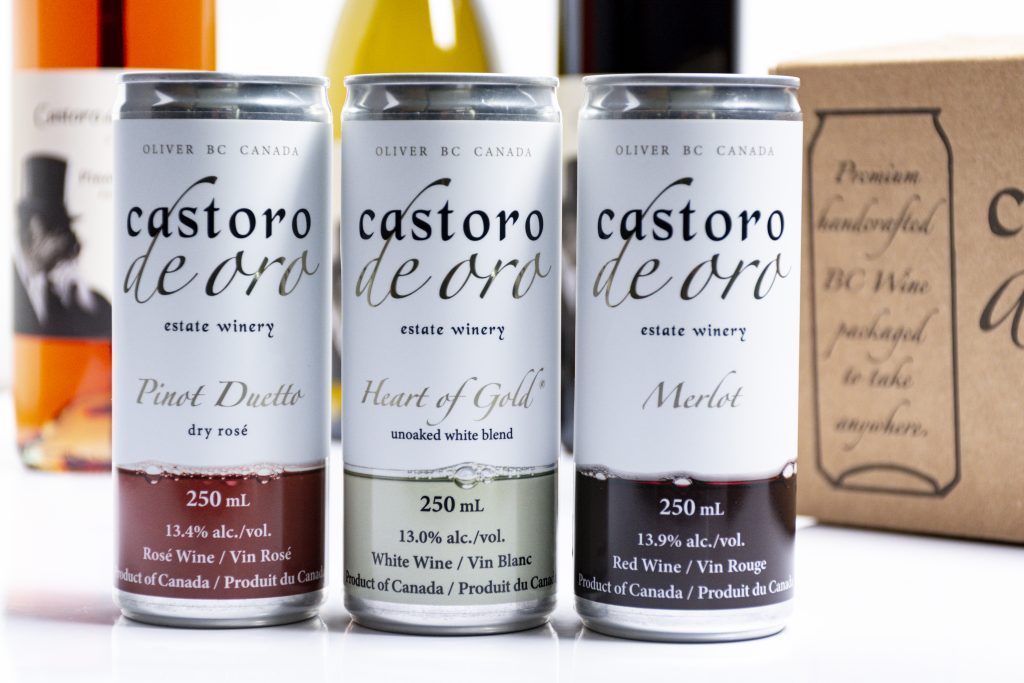 It’s important to nail the branding for such an innovative product because it helps buyers to lower their defenses and embrace something entirely different. Of course, Castoro de Oro isn’t afraid to approach consumer education with a healthy dose of humour.

“A critic called me and asked, ‘Does it taste the same in a can?’ I said, ‘Yes, it absolutely does. We had a lab in Colorado test our wines to ensure they don’t interact with the cans or liners.’ And he said, ‘But don’t you lose some of the aromas if you drink it out of the can?’ And, because I’m a bit of a jokester, I said, ‘Well, if you drink wine straight out of the bottle, you have the same issue, don’t you?’ He said, ‘You got me there!’” 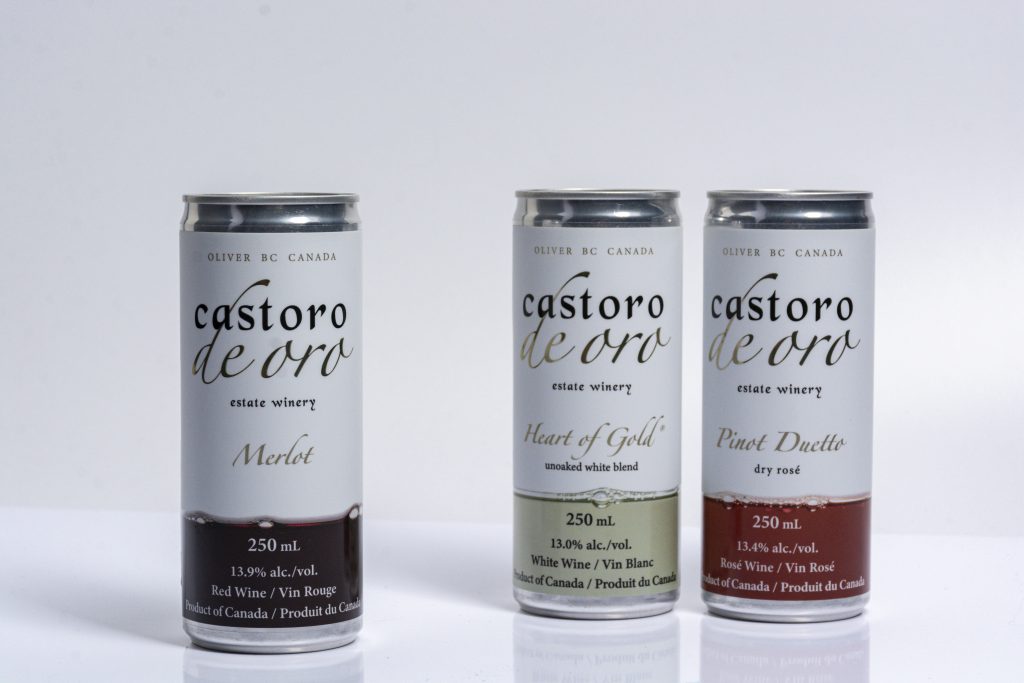 For Stella and Bruno, wine in a can is just another jaunt in a long line of playful—and successful—experiments. In fact, they purchased their vineyard as the unexpected outcome of a joke. They were vacationing in the Okanagan in the spring of 2005 when a server at a wine tasting asked them what they would like to purchase. Bruno said, “How about your winery?” To the Calgary-based couple’s surprise, the server gave them the address for a vineyard down the road that was for sale. Before long, Stella was selling her business, Bruno was exiting his high-powered job, and the two adventurers had become farmers.

Years later, with a history of producing award-winning wines and fearless problem-solving, Stella and Bruno are still having a great time. And we’re definitely having fun right alongside them.