Alaskan Brewing Company: Sharing the Flavours of the North at a Reasonable Price

One of the most pleasurable aspects of being a craft beer fan is experiencing different regions through taste alone. And one of the more delightfully unexpected trips a beer drinker can take is to Juneau, Alaska, via the award-winning brews of Alaska Brewing Company. Founded by Marcy and Geoff Larsen in 1986, the company has become one of the most awarded craft breweries in the history of the Great American Beer Festival.

Because of the Alaska Brewing Company, craft lovers nationwide enjoy the flavours of the north, including alder-smoked malts and Sitka spruce tips. In fact, their extremely popular Alaskan Amber is based on a Gold Rush era recipe that Marcy found while researching Alaskan brewing. She had stumbled upon shipping records from the Douglas City Brewing Company, an outfit that brewed from 1899 to 1907. Then she found a newspaper article from the period that described how the beer was brewed. Incredibly, Marcy and Geoff were able to recreate the beer—quickly discovering why the brew had been so popular back at the dawn of the 20th century.

Alaskan Brewing Company distributes its beer to 25 states. To effectively showcase their brews at various points of sale, they were looking for a stand-alone display—with a difference. Other stackers were cumbersome and costly. Plus, they wanted a universal solution, something that would accommodate their 6-packs in trays or their 12-packs in cartons.

Fortunately, Great Little Box Company was able to deliver on a universal, easy-to-ship, and attention-getting solution.

GLBC helped create a display with a half-slotted container style bottom with an X divider for added strength. Because it’s made of double-wall corrugated material the stacker can easily handle ten to twelve cases of beer.

Additionally, the stacker looks undeniably attractive. print enables the design to pop and any exposed part of the stacker is fully branded.

Finally, GLBC created mailers – packing five stackers in each one for easy distribution.

Thanks to Alaska Brewing Company’s clarity about their needs and our ability to meet them, they’ve seen the following results: 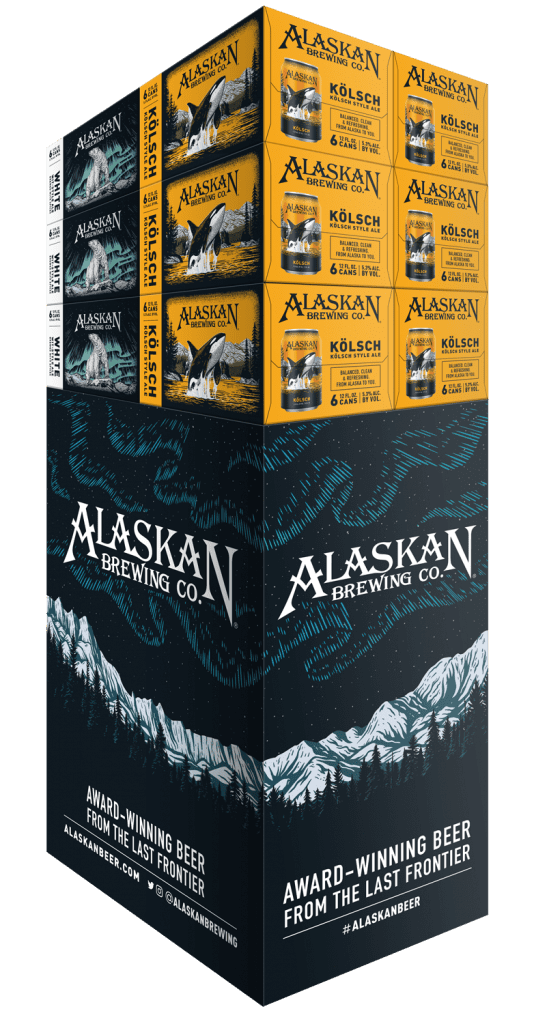 We’re extremely proud to be supporting one of the “grandfathers” of the craft beer industry. Alaska Brewing Company is a storied brewery, with an enviable brand that’s worth protecting.

Since they got their start in 1986, Alaskan Brewing Co. has been located on the same site in Juneau. As recently as 2018, they opened up their lovely tasting room. Northern travelers, take note, and drop in on this iconic brewery if you ever get the chance.